Central Bedfordshire businesses sweep the board at Food and Drink Awards 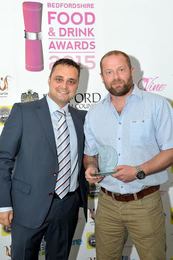 Food and drink businesses from across Central Bedfordshire swept the board at the recent Bedfordshire Food and Drink Awards.

Amongst the winnners were Ampthill based Fratelli Italian Restaurant named overall winner; The Chequers at Westoning who won Gastro Pub of the Year and the Rockabily Cake House in Sandy who were awarded Best Artisan Bakery.

The Leighton Buzzard Brewing Company were named Best Microbrewery.  The business, which has been trading less than twelve months, has been proactive in accessing support, having been involved in the Council's Innovation Bridge project.  The award came as a real surprise to the business, as owner Jon d'Este-Hoare explained:

"I didn't even know I had been nominated when about a month ago I got a letter congratulating me for being shortlisted for the final.  Having only been trading 10 months I went along to the final for the experience without a great expectation of winning.  I really want to say a huge thank you for all those who must have nominated me.  This is the second award I have picked up since opening and it makes the long hours worth while!"