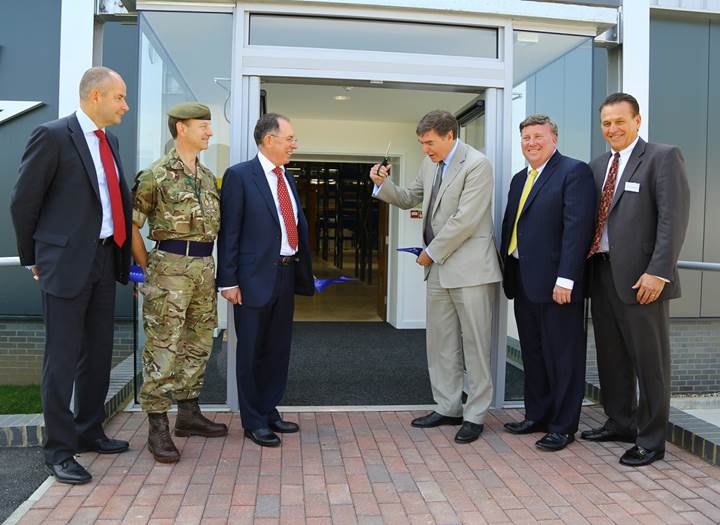 A multi-million pound facility to manufacture turrets for the British Army has been officially opened at Lockheed Martin UK in Bedfordshire.

Philip Dunne MP, Minister of State for Defence Procurement, cut the ribbon on the £5.5 million facility today at the technology company’s Ampthill site. The building houses a state-of-the-art production line to manufacture high-tech armoured vehicle turrets, from development and fabrication through to integration and testing.

The new facility is expected to create around 40 additional jobs at Lockheed Martin and sustain hundreds more as the company works on major Ministry of Defence contracts for both the British Army’s Warrior and Ajax armoured vehicles.

Alan Lines, Vice President and Managing Director of Lockheed Martin UK’s Ampthill site, said: “The turrets that will be manufactured have been designed and developed here in Bedfordshire, cementing Lockheed Martin’s reputation for pioneering design.

“The completion of this facility means we are now able to move into production, with our highly-skilled engineers ready to deliver quality, technically-demanding solutions for our customer.”

Over the last ten years, more than £23 million has been invested by Lockheed Martin to develop the Ampthill site and establish a centre of excellence for manufacturing turrets.

The minister was given a tour of the new building to inspect the full production line and several of the completed turrets.

“The highly sophisticated turrets made here in Bedfordshire are just another example of home-grown British defence innovation that not only boosts the wider economy, but gives our Armed Forces an operational advantage, ensuring we can keep Britain safe.”

Lockheed Martin is working with a wide network of suppliers to deliver both the Warrior Capability Sustainment Programme and Ajax turret.

The workforce at the Ampthill business has more than doubled over the past five years to stand at over 900 today.