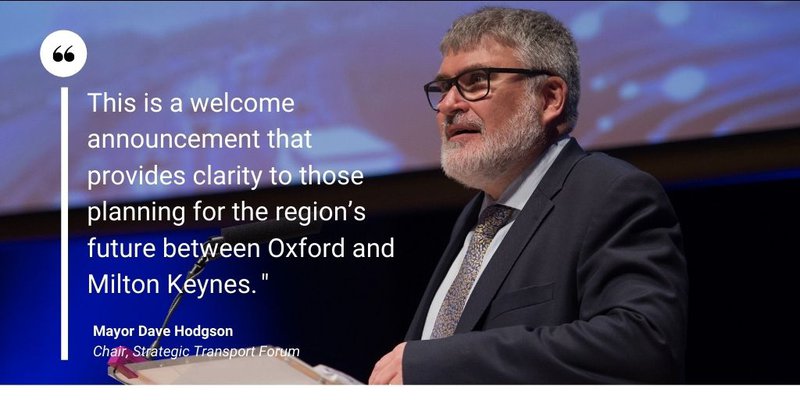 Transport Secretary Grant Shapps has today announced the cancellation of the Oxford to Cambridge expressway project between Oxford and Milton Keynes.

Mayor Dave Hodgson, Chair of England’s Economic Heartland's Strategic Transport Forum, said: "This is a welcome announcement that provides clarity to those planning for the region’s future between Oxford and Milton Keynes.

"As our Transport Strategy sets out, delivery of strategic schemes, including East West Rail and mass transit systems, such as those being developed in Cambridgeshire and Milton Keynes, alongside harnessing smart technologies and targeted investment in the road network, are all essential if we are to ensure economic growth while achieving net-zero emissions.

"Work on EEH’s Oxford to Milton Keynes connectivity study begins shortly. We will work with partners and government to explore the connectivity needs of this important corridor and identify the solutions required to support sustainable growth for the long term."

Building on the insight already developed by Highways England, the Department for Transport said it will now investigate the need for more targeted road interventions in the area, recognising the vital role that transport investment has to support sustainable growth in the region, as noted by the National Infrastructure Commission.

As the Sub-national Transport Body, England’s Economic Heartland will work closely with DfT and Highways England to develop a study on proposals, which will also support the Arc spatial framework.

Transport Secretary Grant Shapps said: "The Oxford-Cambridge Arc is home to cutting-edge research, globally renowned science and technology clusters and some of the most productive places in the country – we want to make sure it has transport fit for such an important region.

"Our analysis shows the expressway cannot deliver such links in a way that provides value for money for the taxpayer, so I have taken the decision to cancel the project. But we remain committed to boosting transport links in the area, helping us to create jobs and build back better from coronavirus.

"We will continue to work on more targeted, localised road improvements to boost transport in the region, alongside the transformational East West Rail, in which we have invested £760 million to deliver the next phase."