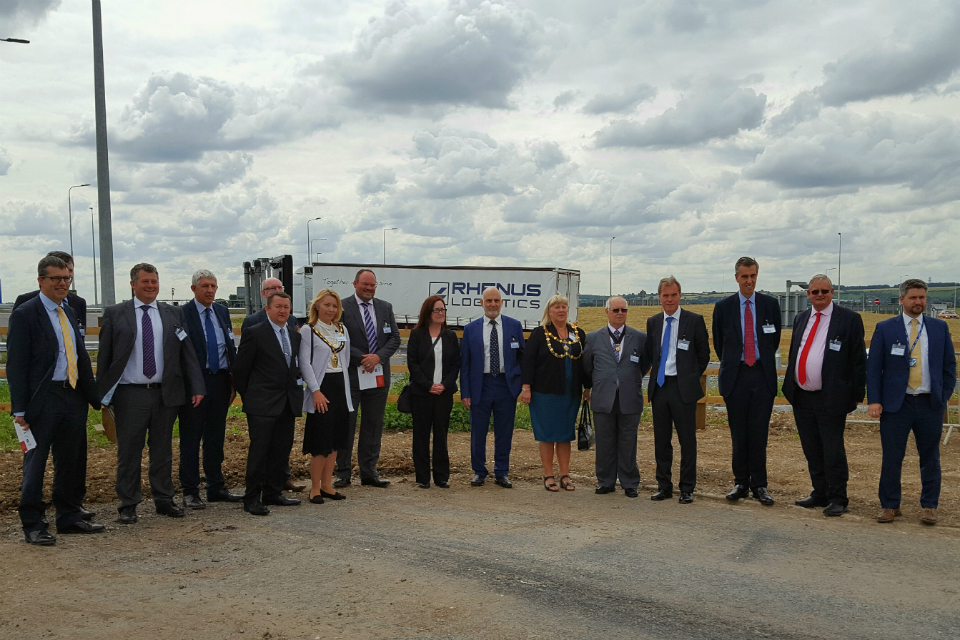 The A5-M1 link road has created a new northern bypass for Dunstable, taking long distance traffic away from the town centre, and opened up opportunities for thousands of new homes and jobs. It connects the existing A5 to the M1 at a newly created junction – junction 11A.

On Thursday 13th July, Highways England invited local public figures, partners and supporters to join the project team for the A5-M1 Link scheme to celebrate the new road, which opened early and on budget in May.

“Since it opened on 11 May, the A5-M1 Link scheme has been providing a vital new east-west connection between the A5 and the M1.

“We would like to thank local people and road users for their patience and support over nearly two and a half years while we have worked to deliver this new road on time and on budget.”

“The Town Council and residents of Dunstable are pleased that after many years of suffering heavy traffic and poor air quality, we now have a northern relief road. “Since its opening the reduction in through traffic, particularly heavy lorries, has been noticeable.

“We look forward to the de-trunking of the A5, the enforcing of a heavy lorry ban, improved air quality in the High Street and continued regeneration of our town.”

Tina Barnard, Hertfordshire LEP board member and chair of Strategic Infrastructure Board, said:

“This short but absolutely vital link between the M1 and the A5 is critical to help economic development and jobs growth both in Central Bedfordshire and Hertfordshire. Not only will it reduce journey times for long-distance traffic by giving HGV drivers easier access to the M1, it will also help to relieve congestion for residents and businesses by taking pressure off local roads.

“This is a prime example of where local authorities and LEPs have worked hand in hand with Highways England to identify the critical interventions needed to grow our local economy.”

“Houghton Regis has watched the progress of the A5-M1 Link with interest and many members of the town were fascinated to watch the bridge demolitions.

“The difference it has made to the town since its opening has been quite remarkable. As more and more people start learning to navigate the new roads and junctions, it is hoped that the roads through the town will see even less cars and lorries, which will improve the air quality and noise. Houghton Regis has welcomed this project and has enjoyed working with Highways England and its joint venture contractor Costain-Carillion.”

“The completion of the A5-M1 link, together with the new Woodside Link road, is a major contributor to unlocking economic potential of the area. This vital road infrastructure enables new developments that will assist growth by freeing up prime employment and housing land.”
The £162 million, 2.8 mile dual carriageway and new motorway junction opened shortly after 4am on 11 May 2017. The new road is also set to make journeys between the A5 and the M1 safer, faster and more reliable.

It will also make a difference to local residents by unlocking 40 hectares of land for new business development and jobs and providing the infrastructure for 7,000 homes to the north of Houghton Regis.

The new M1 junction 11A, which is another key part of the scheme, is now linking the new road and Central Bedfordshire Council’s Woodside link road to the M1, providing better access to the backbone of the national road network and opening the way for new and established businesses in Central Bedfordshire to faster connections with their customers in the UK and beyond.

The new road is the first major East of England project to be delivered in the Government’s £15 billion investment in the strategic road network up to 2021. Now renamed A5, the A5-M1 Link road replaces a section of the A5 through Dunstable which has been handed over to Central Bedfordshire Council and Hertfordshire County Council.

The project included the building of a completely new dualled road, three new junctions including a new motorway junction, and six new bridges. Two old bridges over the M1 also had to be demolished to make way for the new junction 11A.

For more information about the A5-M1 Link click here.

Photo caption: Discussing the benefits of the newly opened A5-M1 link road at the opening ceremony