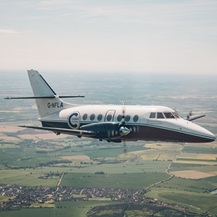 The Jetstream will be replaced with a new Saab 340B, arriving at Cranfield in a few weeks’ time, after a fundraising campaign with charitable donations and contributions from alumni, industry and the universities whose students fly in the aircraft.

The retirement of the Jetstream will end not only the aircraft’s career with Cranfield but the University’s link with the Jetstream family which goes back to 1969/1970 when Cranfield acquired three of the prototype aircraft.

Joe Brown, Senior Management Pilot at Cranfield University – who, along with Dodge Bailey, will be in the cockpit of the Jetstream for its final public outing – said: “This weekend’s display will be the last public outing for our Jetstream and will provide a suitable swansong for 50 years of Jetstream operations at Cranfield – that’s around 47% of the total number of years humans have enjoyed powered flight! We look forward to providing the Jetstream with a fitting send-off through an exciting display which members of the public are welcome to come along and watch.”

Around 1,700 students a year fly with Cranfield and about 30,000 students have benefited from the experience so far. Cranfield won the Queen’s Anniversary Prize for this activity in 2019, the highest honour for a university in the UK.

The 19-seat Jetstream is also a flying laboratory used for research, with sensors mounted on its flight surfaces, engines and fuel tanks to feed data into the cabin during flight.

The new Saab 340B aircraft will not only be able to feed data from the sensors into the cabin but also beam it down to the ground to provide a ‘global connected classroom’ that can be livestreamed.

Funding campaigns still continue to enable the modifications of the Saab aircraft. The latest phase of the campaign provides the unique opportunity for those interested to sponsor various parts of it. More information can be found via the dedicated NFLC fundraising webpage.