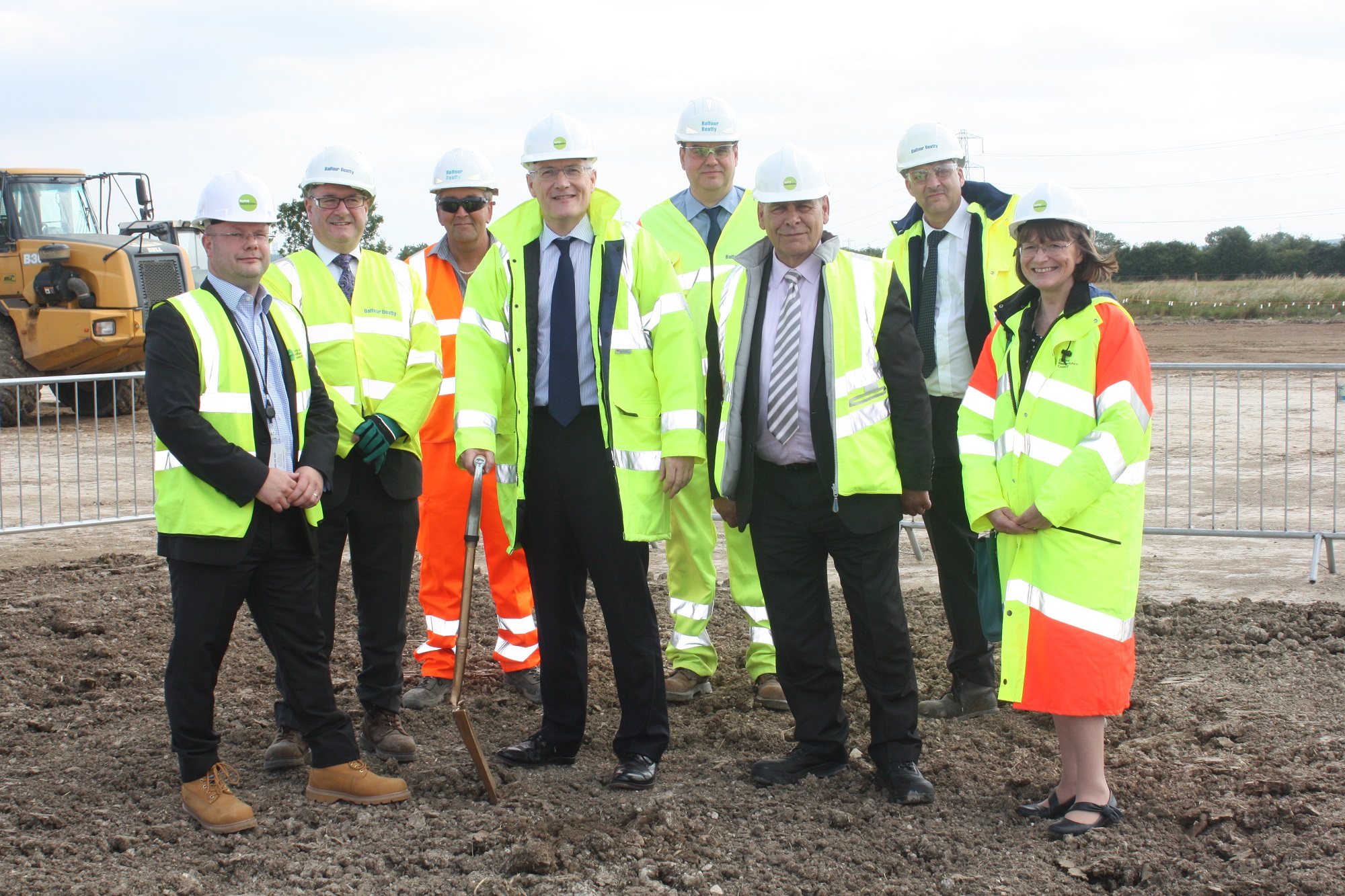 New Transport Minister, Andrew Jones MP, officially launched construction of the Woodside Link road  Thursday 16th July during a visit to the site.
The Minister saw first hand how the £38.3m scheme will bring vital connectivity to new housing developments, the A5-M1 Link road, a new M1 motorway junction 11a, and the industrial areas of Houghton Regis and Dunstable.
Cllr Nigel Young, Executive Member for Regeneration, hosted the event, which celebrated the unique funding partnership that has made the road possible, with £20m of funding from SEMLEP  (South East Midlands Local Enterprise Partnership), £5m from the Government’s Pinch Point Fund, and £1m from developers.
Transport Minister, Andrew Jones MP,  said: “This scheme will make it easier for people to access Luton Airport and the M1, providing better journeys for residents and businesses and supporting more housing and jobs. The Government is committed to investing in faster and more reliable transport links. This road scheme is part of our long-term economic plan to deliver benefits for everyone.”
Cllr Young added: “We have worked very hard to turn our regeneration plans for Dunstable and Houghton Regis into action and the link road is critical to these. It plays a vital role in unlocking nearly £2 billion of investment in housing, communities, business and infrastructure. It is already attracting major companies to the area who are expected to bring 2,000 new local jobs in the immediate future. For Dunstable and Houghton Regis, the Woodside Link is bringing regeneration while relieving town centres of congestion.”
Guests also included Hilary Chipping, Head of Infrastructure (Housing & Transport), SEMLEP; and Nick Osborne, Regional Director of Operations for contractor Balfour Beatty.
Nick Osborne, Balfour Beatty  Regional Director of Operations, said: “Today’s ceremony performed by Andrew Jones MP marks a significant step in the delivery of the Woodside Link Road Project alongside Central Bedfordshire Council, a road that will provide an important connection between the Woodside business area and the M1.”
Dr Ann Limb CBE DL, Chair of SEMLEP, said: “SEMLEP is delighted that the Woodside Link project in Dunstable, with £20m of funding from SEMLEP’s Local Growth Fund, is now underway. This new road will play a vital role in opening up housing and commercial development sites north of Houghton Regis to enable the delivery of an additional 2,400 new jobs and 5,150 new homes by 2031.”

A study measuring how much CO2 is produced by vehicles idling in England has found that Central Bedfordshire is the third least polluting region in the East of England.

The Department for Work and Pensions has launched £4,500,000 of grant funding to support community projects